Schedule : Back to Dr Conor Caffrey 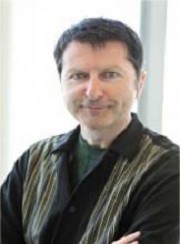 The CDIPD at UC San Diego (http://cdipd.org/) is engaged in drug discovery for parasitic diseases of poverty. For schistosomiasis, treatment and control precariously rely on just one partially effective drug, praziquantel. New drugs are needed. The CDIPD and collaborators have designed an automated, high-content drug-screening platform to quantify the chemically-induced, multi-parametric static and kinetic responses of Schistosoma mansoni. I will describe the platform’s development and implementation, as well as the interrogation of the data arising using a custom-built, graphical user interface called SchistoView. Screening data for high-value small molecule collections will be presented. Among the compounds identified in one screen were proteasome inhibitors. This prompted an investigation of the proteasome as a possible drug target. Our early forays into designing proteasome inhibitors based on a marine natural product chemical scaffold will be briefly discussed. Supported by a UCSF Clinical and Translational Science Institute T1 catalyst award, and by the NIH awards, R01AI089896, R21AI107390, R21AI133393 and R21AI126296.