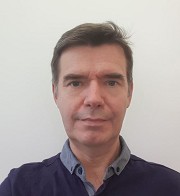 I completed a PhD in Immunology/oncology in 1995 at the University of Birmingham before moving to Manchester. Following on from postdoc placements at the University of Manchester and the Paterson Institute, I joined Astrazeneca at Alderley Park as a postdoc with the Discovering Enabling Capabilities and Sciences (DECS) section and carried out work to support a mathematical model for patient response to the EGFR inhibitor Iressa. The following year I joined the cancer department as a permanent member of staff. I was involved in assay development using phenotypic screening for various projects over the next 3–4years. With the support of Astrazeneca who had just announced the move from Alderley Park to Cambridge, myself and a colleague were able to spin out a company and formed Imagen in 2008. Imagen is a CRO that specialises in personalised medicine, phenotypic screening and drug discovery