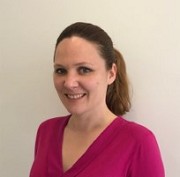 Theresia is a Senior Scientist II at the Cambridge biotech start-up Maxion Therapeutics, where she is establishing the drug discovery platform for the development of antibody-like drugs called KnotBodies.The Knotbody technology is a novel drug discovery solution aimed at creating the first and best-in-class protein therapeutics for treating ion channel and GPCR-driven diseases, including chronic pain and autoimmune diseases.
After graduating from the University of Heidelberg and gaining her doctorate in secondary active multidrug transporters at the University of Cambridge, Theresia embarked on an academic career at Cambridge and later Rothamstead Research, specialising in functional characterisation of a range of secondary-active and organellar ABC transporters. She then became interested in biotech start-ups and joined Artios Pharma where she played a central role in establishing a protein purification and expression platform in Artios’ newly created Biochemistry and Screening Team.
She has a passion for knowledge sharing and, throughout the academic year, gives tutorials in pharmacology as part of the undergraduate syllabus at the University of Cambridge. She is very excited to have the opportunity to represent Early Career Professionals (ECPs) at the Protein Sciences in Drug Discovery meeting 2022.