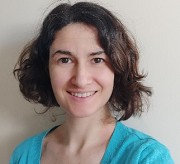 Aurelie Bornot is a science lead and program manager in the Human Genetic department at GSK since May 2022.

She completed her PhD focusing on protein structure prediction using machine learning in 2009 in Paris and received a “L'Oréal-UNESCO-French Science Academy” award for her work. She simultaneously worked as a consultant at L’Oréal in 2008. She then joined AstraZeneca (AZ) in 2010 as a bioinformatic scientist and became Director in the AZ Discovery Sciences, Quantitative Biology department in 2020. She has played a critical role in many projects across AZ: supporting the initial build of NGS analysis capabilities, collaboratively prototyping the CRISPR guide designer or enabling the initial investment decision in AZ secretomics library. In 2019, she collaboratively developed the CRISPR screen analytical pipeline now used in the AZ/CRUK Functional Genomics Centre (FGC) and co-received a CEO Award. From 2020, she became involved in designing solutions to support protein production capabilities and lead the development of machine learning models to inform decisions in this area.

Aurelie is a recognised scientist in the international scientific community. Her work was published in high impact journals such as Nature communications, Cell Stem Cell and Nature Metabolism.