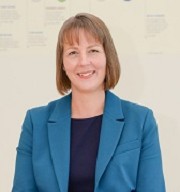 Dr Jo Brewer has served as Chief Scientific Officer since May 2022, leading Adaptimmune’s Research division to generate innovative cell therapies for people with cancer.
Jo has more than 20 years of experience in immunotherapy research across the breadth of discovery in both autologous and allogeneic platforms. She was one of the founding scientists at Adaptimmune, who built multiple research teams working on the early SPEAR T-cell therapies including NY-ESO (transitioned to GSK), ADP-A2M4 and ADP-AFP, early next-gen approaches,including ADP-A2M4CD8, as well as her more recent focus on a stem cell derived allogeneic platform.

Prior to joining Adaptimmune in 2009, Jo held positions at Avidex, Medigene and Immunocore. She holds a master’s degree in Natural Sciences and a PhD in cellular signalling, both from the University of Cambridge, UK.