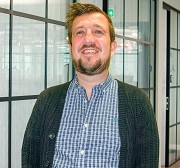 Simon Richards is the Executive Director of the Computational Drug Design group at Exscientia, and has been at Exscientia for 18 months.
Simon gained his BSc in Chemistry at the University of Newcastle and subsequently spent 20 years in Big Pharma specialising in CNS disorders. He was trained as a Medicinal Chemist, later developing a passion for Computational approaches to drug design which led to numerous Candidate deliveries. He believes marrying Medicinal Chemistry principles with Computational Techniques and Artificial Intelligence is the key to discovering drugs more quickly and efficiently.