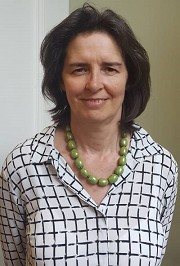 Lucie Clapp is Professor of Vascular Physiology, Head of Pre-clinical & Fundamental Science and Deputy Director of the UCL Institute of Cardiovascular Science. A pharmacologist and biophysicist by training, her research expertise lies in the functional properties of potassium channels and prostaglandins in the cardiovascular system and their role in bacterial infection and blood vessel remodelling. She has won numerous awards and accolades for her research, including 5 science fellowships that have supported her own personal salary and laboratory for 16 years. Through knowledge-transfer partnerships and consultancies, she has interacted with several Pharmaceutical companies for the last 20 years, raising funds to develop novel therapeutic strategies for treating pulmonary hypertension, thus bringing an understanding of the commercial world alongside academia. In 2017, she was awarded the AstraZeneca Prize for Women in Pharmacology. Lucie Clapp has a leadership role as a trustee of UCL, elected in 2015 by the professorial membership of UCL to serve on Council, the governing body which oversees the finances, management and administration of the university.